What Did You Think Could Do? 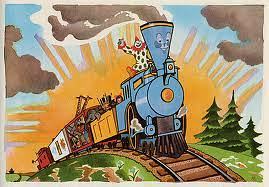 Today’s Thought: I celebrate what I thought I could.

Don’t you love it when psychology catches up and proves what pop-psychology has known for decades (if not longer)?

It’s like the underdog finally has its day. And it’s sweet. And it now gets to run even faster knowing that running is good and actually healthy for the body. (If you haven’t checked out Born to Run you should. It’s one of my favorites and definitely get me running.)

Well, Hope Theory happened. And it happened to say that thinking you can or cannot do something has big implications to levels of Hope, one of the top 27 Character Strengths and Virtues outlined by the official field of Positive Psychology.

If you think you can. You can.

If you think you can’t. You can’t.

I had a chance to catch up with the Little Engine-who-could. This is what she had to say about that…

JAW: Little engine who could, I was wondering your thoughts on the matter of getting up the mountain?

JAW: And did you.

And she did. And it was AWESOME.

Even better, is that it turns out that the third official component of hope is Agency. Agency is a fancy word derived from the Latin verb agere (meaning to do). And it also beautifully captures the idea of being capable or able to get it done.

Let’s get down to cultivating some Hope. The thought for today is…

In the last year, what did you accomplish that was hard that perhaps at times you thought you couldn’t do, but you did?

Also read: Past Behavior is a Predictor of Future Results

Past Behavior is a Predictor of Future Results