The concept behind the Powerful Relationships exercise is based on the same principles found in the Assumption Chart and Signature Perspectives exercises in Session 3. The central concept is the initial assumption, attitude, or perspective which heavily influences the effectiveness of the action.

A negative assumption or terrible attitude has a negative impact on the action we take and the results that ensue. Such a connection is straightforward, yet so many people, often without even realizing it, take on a negative assumption and still expect to get desirable results. Sometimes having a pessimistic perspective may serve to lower expectations so we don’t get disappointed, and that can be fine and healthy. What’s not fine or healthy is for that pessimistic perspective to become the default rather than an implementation of critical thinking.

The best example of this is a student who thinks she has a terrible teacher. She claims her teacher is horrible. She solicits tests over material not presented in class. She picks favorites, and the student doesn't believe she is one of them. There are a myriad of other negative assumptions that a student may imagine about a teacher they perceive as “bad.”

The student with this kind of assumption often takes actions that communicate to those around her that she doesn’t care about the class, that she doesn’t like the teacher, and that she’s uninterested in learning the material.

Most students don’t recognize the amount of ownership they possess in a teacher-student relationship. As a result, students think they are powerless in improving their relationship.

The next step is for students to think about the actions the teacher would take if they had this assumption about a student. Usually, those actions are out of frustration. Why this exercise works well is it provides a diagram, the Vicious Cycle of a Negative Relationship.

The second stage of the Powerful Relationships Exercise is for students to think about a positive assumption that they can make about the teacher. Then think about the positive actions that they would take based on that assumption. And then the assumptions the teacher would make if there is a student is acting baseless positive assumptions. And then the eventual actions of the teacher. It is remarkable to see the difference between the two cycles. Students are often blown away by their ability to take ownership and to be proactive in creating the powerful relationship they want in their life. This exercise works because it diagrams a lot of the frustration teenagers feel in their relationships with other people, whether these people are their peers, teachers, or parents.

How to Best Support Your Child

You can do the same exercise for yourself and your relationship with your child. The key is to hold powerful and positive assumptions about the ability of the other person and to take action that supports those assumptions. It’s a basic empathy skill that you can help your child learn to understand.

It’s also important to recognize that simply changing an assumption and changing action doesn’t necessarily mean that a relationship will magically become better. Yes, oftentimes it does shift, but the reality is this exercise alone doesn’t solve the frustration our students feel. It becomes a matter of patience to continue trying until it does work. However, there are several circumstances when it makes the most sense to hold onto a negative assumption to protect oneself either physically, mentally, or emotionally. In that case, it becomes a healthy negative assumption for the sake of safety. This is totally acceptable and useful.

From the Academic Life Coaching Workbook:

Relationships are central to living a fulfilling life. You can use the following chart below to check your assumptions, diagram how relationships are not working, and get back on the right track. 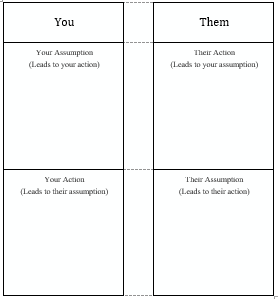