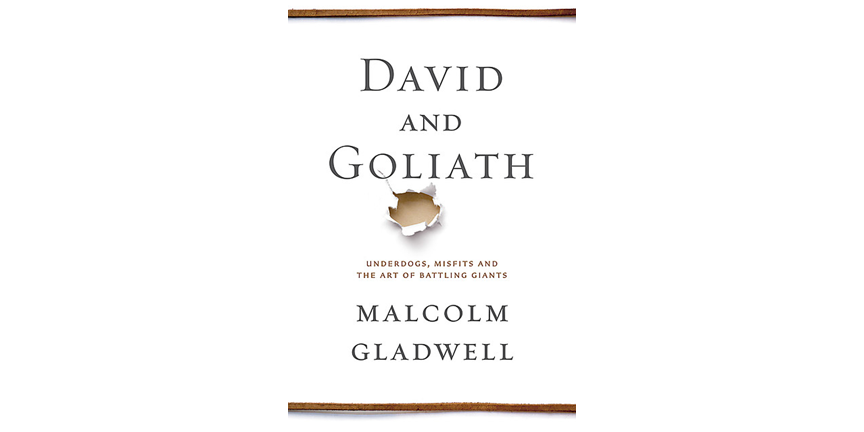 I’d like to tell you about my first impressions of Malcolm Gladwell’s new book David and Goliath.

I’ll admit, I’m only part of the way through the book. Reading Gladwell is like taking a series of meandering tangents along a hiking trail. The tangents themselves are beautiful, as individual pieces, in and of themselves. But then, he reaches a literary vista point and reorients the perception of what is important and provides insight about our place in the world. I have four initial thoughts.

1. How does he do it? It’s a brilliant book, powerfully written, and one that I’ll keep on the “important” shelf of books. You know, that shelf that you have in your house containing the books that have made a significant impact in your life.  Or, those books you wish would make a significant impact in your life. Well David and Goliath is now on that shelf.

2. This book is going to serve as a rallying cry for the underdogs in the world. And most people identify themselves as underdogs.

I even look at Academic Life Coaching as an underdog trying to work with the Goliath of the current educational system. Administrators, teachers, and students are all trying to deal with a system that most people admit isn’t working. In some way, we’re all Davids fighting big giants. And Gladwell points out that there are several distinct advantages to being underdogs.

Advantage 1: Underdogs are forced to be more creative to win.

Advantage 2: Underdogs who do make it – and yes the odds may be stacked against them – develop perseverance and other skills that others could not possibly imagine.

3. Gladwell also makes a compelling argument, applicable to parents and their college-bound kids, that going to a college like Hartwick has several advantages over going to Harvard.

Being a big fish in a small pond rather than a small fish in a big pond offers a better change of graduating with a valuable science degree, arguably the most valuable degree you can get from a university. Going to Hartwick gives you a 30% better chance of actually getting a such a degree. And those students who perform in the top of their Hartwick class are more like to publish and experience success in their career, than the bottom-performing students at Harvard.

Bottom-line: Attending an elite school but performing in the lower half is demoralizing. It’d be better to attend a good school and excel.

4. This book leaves me fascinated about the idea of whether or not people would willingly give up advantage. Would a young person give up a trust-fund? Would a football team say they are not going to play their best players in order to inspire a better team dynamic?

I doubt it. I also doubt that the education system, with all of its Goliath-like tendencies, is going to suddenly become the swift-footed David.

I believe that change is up to those of us on the outskirts of education.

Also read: Life Coaching is the How to Positive Psychology's Why

Life Coaching is the How to Positive Psychology's Why